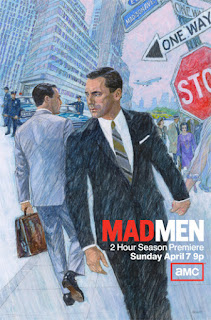 Tonight's episode brought more flash backs. I have to say the more I see of Dick/Don's childhood the more I'm surprised this guy functions at all. Let's take stock. Dick is born to a prostitute who name's him Dick because his father is such an awful person. Dick is raised by his father, who cheats passing hobos and whores. His adoptive mother who wanted a child, still probably was not enthused to get one from her husband encounter with a prostitute, and even less so once she gets pregnant. Then of course her husband dies and Don and his step mother go to live in a whore house.

Based on this weeks flash back of her sending him to sleep in the basement when he gets sick, you get the idea that no one ever took care of Dick. In this case one of the prostitutes in the house takes him in.  Once he's well she takes his virginity. This is probably the first time anyone was kind to Dick, taking care of him when he was sick, but then that experience got all mixed up with sex. Now maybe if he sleeps with enough women he'll feel cared for again.

When Chaugh is talking about Gleason passing "He is a piece that can not be replaced" Don's face says no one will ever say that about me when I die. Dick has such self loathing. Why wouldn't he? He has no other frame of reference.

Really, if you were this guy and you saw any chance to be someone else, wouldn't you take it. While Peggy tells Stan in this episode to face his pain and not hide in sex and drugs. It's good for these two who have limited exposure (remember that line) to pain, Dick is bathing in it. He either needs to start 3 sessions a week with a shrink or keep the girls and booze coming. I would suggest avoiding any more of Jim's doctors shots of B vitamins and"mild stimulants" however.

At the end of the episode Don seems to have regained his composure as far as Silvia and Chevy go. Giving Silvia the cold shoulder in the elevator. Then telling Chaugh that he won't jump through any more hoops for Chevy and will only supervise others work on it. Leaving us with the line "Every time this place gets a car it turns into a whore house." The one place Dick has risked every thing to escape.

The whole office on speed made for the freakiest Mad Men ever. Loved Peggy and Ginsberg quoting Alice in Wonderland.

Ken tap Dancing while describing his job as a crash test dummy with the real Mad Men, Chevy executives. Not to mention the fact that he mixes up his mother and his first girl friend.

Don has no heart beat

Betty's looking more her old self, as Henry heads out on the campaign trail

Don and the soup ad mother with the beauty mark that repeats on the prostitute, who takes his virginity, and Silvia.

Sally knowing so little about her father that a complete stranger/thief can answer any question with a plausible answer she can't refute.

I'll be surprised if this wasn't all a bad, delirious dream Don was having on his sick bed - or office couch..

I was wondering do you have any idea on the Don's "big" strategy?

Don's got a "great" idea or strategy while working on weekend. He types on a typewritter:

... and later explains to Ginsberg and Peggy:

Peggy: I've never seen it before.

Don: Well, it says it all. It really does.
Okay, I've got this great message and it has to do with what holds people together.
What is that thing that draws them? It's a history.
And it may not even be with that person, but it's...
it's like a... well, it's bigger than that.

Peggy: And that makes them buy a car?

Ginsberg: - You gotta get your foot in the door.

Don: - Exactly!
So, how do I do that?
Let's say I get her face to face.
How do I capture her imagination?
I have a sentence, maybe two.

Ginsberg: Promise them everything. You know, you're gonna change their life.
"- You're gonna take away their pain."

Ginsberg: Then you hit 'em with the one-two punch. What's the answer to all of life's problems? A Chevy.

Ginsberg: Then it's oatmeal?

Can you clarify what is this idea / strategy about?

What does it has to do with "soup ad"?

Is he actually talking about him and Silvia?

Or was this idea worth nothing?