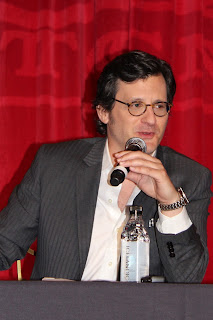 The programming of this festival has to be challenging. While they have a theme of travel in films, there are so many types of viewers and they have to please them all. Everything from silents to noir to musicals to more current films, not to mention the whole debate about 35mm vs digital and just plain old quality issues. I asked Tabesh about how they make these decisions. He responded that there are 3 or 4 people in a core team that create the long list, but it is him that pairs that down and makes the final decisions based on availability, diversity, and quality.

Robert Osborne said that now that the festival is established they are able to be a bit more eclectic in their film choices. People don't even need to know what the program is, they are buying tickets and just trusting that Tabesh and McGillicuddy will have their best interests in mind. Within the community TCM is definitely a known quantity. McGillicuddy told us that 20% of the festival budget goes to projection and technical support asan example of their dedication to presenting the films in their best quality possible.

Much of my favorite part of the festival is the interviews with the stars of the films. This year has a lot of great guests. Robert told us once the program is set he gets first pick at interviews. Ben Mankiewicz talked about how much he's enjoyed getting to know and become friends with the stars. Further Ben let us know his disappointment in not getting to interview Max Von Sydow before the screening of Three Days of The Condor, one of his fave films. Sorry Ben.

Some limited access tickets are still available and you can also try to get into screens with individual tickets.

Stay tuned tomorrow for picture from the red carpet gala tonight of the World Premiere Restoration of Funny Girl. Also you can watch my twitter stream for some live tweeting tonight (@EliseCD)
Posted by Elise Crane Derby at 10:26 AM