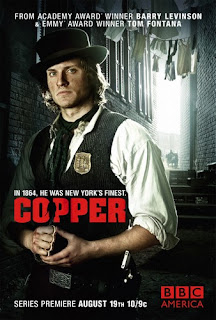 Copper is a new show coming to BBC America August 19th. It's set in NewYork's Five Point in 1864 and centers on a police officer/Copper who has demons of his own.We're lucky, there will be 10 episodes instead of the Brits usual 6 or 8.

I was able to watch the first two episodes and found them action packed. It's a lot like every other Cop show, only the time period allows the officers to behave in all sorts of out of the question ways today. No one is having their Miranda rights read and hey if someone dies why not help yourself to some of their stuff?

It's a pretty gritty world and just about everyone needs a bath in every episode.The class system is in full force, even in the brothels. Both the stories and the lighting are very dark, but I'll be watching to see where this show goes.

This is BBC America's first original scripted drama but hopefully with it's success there'll be more to come!

I just saw it and liked it a lot. There is a short note on it at my blog: http://slapbookleather.blogspot.com/2012/08/copper-or-on-us-maps-manhattan-is-in.html