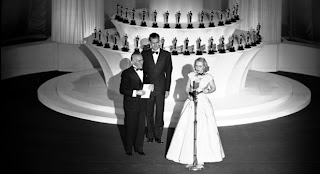 I was so sad to hear that Celeste Holm died yesterday. I know she was 95 but still I had hoped that they would get her to come to the next TCM Film Festival. She was such an amazing actress. I feel like most people know her from All About Eve, but she won an Oscar in 1947 for Gentlemen's Agreement. See her accepting below.

It's been a rough few weeks with many greats of the film industry dying. I hope they are all happy in that great big Brown Derby in the sky.
Posted by Elise Crane Derby at 8:21 AM