Halloween on The Hub 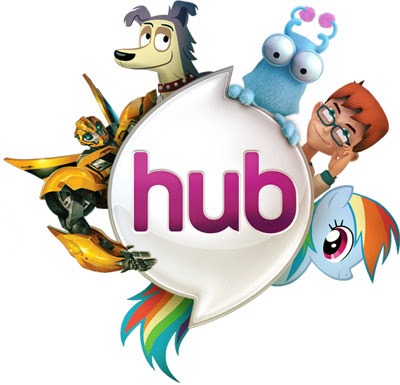 The Hub invited my daughter and I to a great Halloween, The Haunting Hour and My Little Pony screening party the other night. If you're looking for Halloween shows for your kids these are great options, see below for air times.

The Haunting Hour is a R.L. Stine series, who you may know from the Goosebump series. It is a bit more scary though. They've sent me some stills of it but I don't want to give anything away. So watch it with your kids (7 and up) and make sure not to throw the popcorn when you jump.

For the younger set there is My Little Pony's Halloween episode. My 7 year old loved it equally but differently, obviously.

I gotta say the Hub is one of my favorite channels for my daughter, from their game shows to the series it is universally quality programs.

Here are some of the highlights of “The Haunted Hub” weekend schedule:


• Saturday, October 29, 10 a.m. ET - “My Little Pony Friendship is Magic” (encore presentations throughout weekend). The Halloween-themed episode “Luna Eclipsed” centers on the Ponyville celebration of Nightmare Night. The celebrations are in full swing when Princess Luna comes to Ponyville determined to change her frightening public image. Produced by Hasbro Studios.

• Saturday, October 29, 5 p.m. ET - “R.L. Stine’s The Haunting Hour: The Series,” All-new episode (encore presentations throughout the weekend). Frankie Jonas (“Jonas” TV series) and Kacey Rohl (“The Killing”) guest star in “Pumpkinhead,” a new Halloween-themed episode that follows three siblings as they visit a spooky pumpkin patch. But the patch’s sinister farmer seems to have more tricks than treats in store for the kids in this spooky episode of the live-action series produced by Haunting Hour Productions, Ltd. and inspired by the master of children’s horror himself, R.L. Stine (“Goosebumps”).

• Saturday, October 29, 3 - 9 p.m. ET - “R.L. Stine’s The Haunting Hour: The Series” Marathon (with different episodes airing Monday, October 31, 5 – 7 p.m. ET). Anthological storytelling returns to television in this half-hour, live-action children’s series that embraces the thrill of the chill taking viewers, young and old, on a new and creepy adventure every week. With back-to-back episodes to celebrate the Halloween holiday, this is the show kids won’t let their parents watch by themselves! The series is produced by Haunting Hour Productions, Ltd. and inspired by the master of children’s horror, R.L. Stine (“Goosebumps”).

• Sunday, October 30, 3 – 7 p.m. ET - “Goosebumps” Marathon (with different episodes airing Monday, October 31, 3 – 5 p.m. and 7:30 p.m. ET) Based on the award-winning “Goosebumps” books written by R.L. Stine, the anthology series is set in a strange reality where nothing is ever as it seems. The marathon will feature highlights of the eight scariest episodes of the series including iconic Halloween episodes “The Haunted Mask” and “The Haunted Mask II.” Produced by Scholastic Media.
Posted by Elise Crane Derby at 5:14 AM