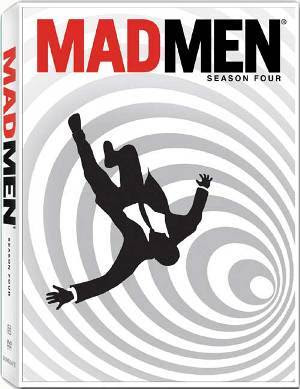 Lionsgate sent me an advance copy of the Mad Men Season 4 DVD this week. With all the uncertainty about Mad Men Season 5, I was over the moon to get this. If you're as big a fiend as I am, you should really get this methadone until the real thing is available.

Here are the bonus features.

• "Divorce: Circa 1960s" - A three-part documentary about divorce during a time when the traditional family was the core of American society.
• "How to Succeed in Business Draper Style" - CEOs, advertising legends and executive coaches use scenes from Mad Men to detail Don Draper's 10-point blueprint for success.
• "Marketing the Mustang: An American Icon" - The birth of the Ford Mustang as well as the marketing and advertising campaign that launched this American classic.
• "1964 Presidential Campaign" - Archival footage of President Johnson's and Senator Goldwater's speeches, campaign commercials and the Presidential Inauguration of the most lopsided elections in American history.
• Mad Men Season 4 commentaries - Matthew Weiner and Mad Men's cast and crew take viewers behind the scenes in feature-length audio commentaries for all 13 episodes


P.S. The box is really cool too. The Vertigo-esque has a 3D element that makes it much better than how it looks on a computer screen.

P.P.S. David Hinckley of the Daily News is reporting that Mad Men season five will be delayed to the Fall based on "sources". Check his article.
Posted by Elise Crane Derby at 5:30 PM

Thanks for the PS about the box. I happen to have given birth to the designer. LOL