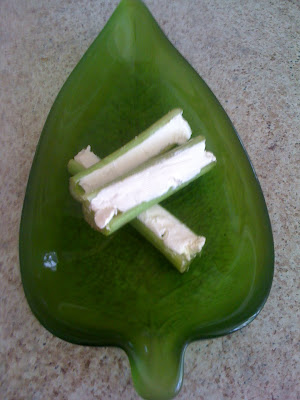 Celery and cream cheese may not be the sexiest recipe I could give you for Thanksgiving, but of all the Thanksgiving foods it's one of my favorites. In preparation for this post I looked around online to see if my recipe was anywhere else. I'll admit I wasn't that thorough, but in a cursory search I didn't see it.

This is my grandmother's recipe who was raised in Minnesota, but it was really the next best thing to Norway. I don't think she even learned to speak English until she was about ten in 1920. Which is my round about way of saying this is the Norwegian way to make celery with cream cheese. Like any good Norwegian there aren't a lot of frills or pomp, but it definitely gets the job done.

Wash your celery and cut into desired length. Then mix cream cheese and blue cheese. I would say about a tablespoon of blue cheese to a stick or tub of cream cheese. Then add the secret ingredient onion juice. To render the juice just cut an onion in half and drag a sharp knife over the flesh repeatedly. You'll get a bit of the onion too but mostly you'll get juice. Add about a tablespoon of juice. You can adjust measurements to your personal taste.

Here's the lady herself rocking some seriously fabulous 1930's lounge attire. You can do that too,if you stick to celery on Thanksgiving. Or at least that's what she would have told me while I was scarfing down cookies. 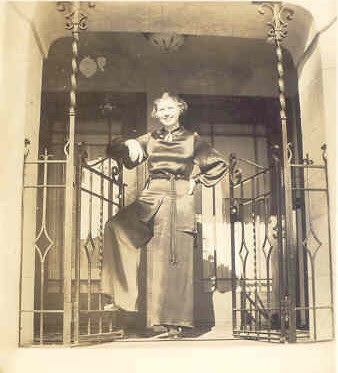 I love celery and cream cheese and this spin on it sounds delicious. I'll be with my in-laws who grew up in Minnesota, raised by parents from Norway. I'll have to ask if this was a family favorite of theirs too!

Great Amy. Glad to help. If you're doing a plater of veggies you could also do pickled cucumbers. I know it sound complicated, but it's just sliced cucs in half water and white vinegar and a teaspoon of sugar. Grandma use to always use sweet n' low.
I think this is another Norway dish by way of Minnesota. Though it tastes a lot like japanese cucumber salad, and she did live in a Japanese part of Los Angeles most of her adult life.
Either way it's yummy.
Happy Thanksgiving!

we'll be having this Babcock family fave in Texas - Happy Thanksgiving!
- Leigh Ann