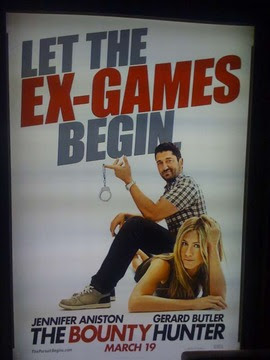 Last night I was invited to see a preview of The Bounty Hunter at the Sony Lot. I LOVE going on the lots. Especially Sony, because it's so close to my house.

I gave the movie a solid B. It's a romantic comedy with a little action movie thrown in. My only problem with it is Gerard Butler. I feel bad to point him out but something about him just oozes Misogyny. Which I don't like. Also I would have liked to have seen more of Christine Baranski, who played Jennifer Aniston's mother. Jennifer Aniston was wonderful of course, she can do no wrong for me.

On the way out I did hear a girl in her 20's say she loved it and thought Aniston and Butler had great chemistry. I also talked with two women in their 70-80's and they said they liked it too, but it was a bit confusing. There were some men there but I didn't ease drop on any of their conversations.

So what I'm saying is, it's a very entertaining movie particularly if you don't mind the He Man type. Just watch The Good Wife if you want more Baranski I suppose.

It opens Friday till then here's the trailer.

Posted by Elise Crane Derby at 9:14 AM

He's hot, but I get that vibe off him too- sad, but true.