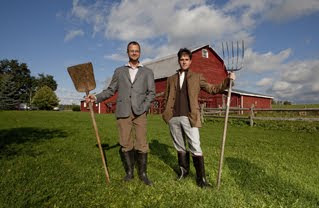 I had a great time today seeing all the shows that the Discovery Networks will be rolling out this year. There were some great ones and some odd ones, but the one that stood out was The Fabulous Beekman Boys. You have got to watch this show. Sadly it doesn't premiere until June on Planet Green, don't worry I'll remind you.
This is a show about a New York couple(Josh and Brent)who buy a farm in upstate New York and all the adventures that entails. Josh and Brent are immediately likeable. They are struggling with managing the farm and their relationship and you are pulling for them to make it on all fronts.
There is also farmer John, the man with the expertise who is teaching the "boys" all about farming. Farmer John seems like a soft touch, especially when he talks about his goats. I look forward to finding out more about him. What I know now is he lost his farm and wrote a letter to Josh and Brent asking if he could keep his goats on their land. There's a story there.
You can check out the whole Beekman story at Beekman 1802 you can also buy some of their goat milk soap, which they tell me is fantastic.
Posted by Elise Crane Derby at 8:34 PM

It was so nice to meet you at the TCA. Thanks for the shout-out. We are on our way back to the farm this morning. Not quite sure I'm ready to leave all of the LA sunshine just quite yet

It was great to meet you too. Wish I could have made the cocktail party, but you know how it is raising "kids". Looking forward to seeing you guys on the show and maybe at the summer TCA.
Stay Warm!

I want to know farmer John's story now! I hate the thought of the loss of his farm. I'm spinning all sorts of sad scenarios. Put me out of my misery and tell me there's a happy ending.