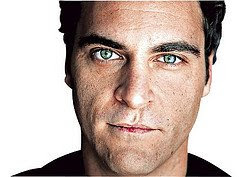 Everyone is talking about Joaquin Phoenix on David Letterman last night. Was he high, was he in character for some new part, has he lost his mind. I don't know. If he's in character it seems weird, I mean for the last month or so I've seen him around acting sort of out of it and saying that he's working on a hip hop career. It's not unusual for actors to decide to move into the music business (and vice verse) but hip hop, really??
Now if he's high, I think Letterman's behavior last night was reprehensible. Sure it's funny, if you think it's just an act, but if this is who Joaquin has become, he needs help, not to be the butt of some late night jokes. All those people that made money and careers from Gladiator and the Johnny Cash movie, should look into getting him help. I know you can't force someone to get help, but you can encourage it. If people start telling you you're too messed up to be on T.V., you might get the message.
If he's just gone round the bend, then someone needs to get him some better pharmaceuticals.
If it does turn out that he's just in character, I'm going to start using that excuse. Next time you see me face down in the gutter, don't worry, I'm just in character.
Posted by Elise Crane Derby at 3:12 PM