Tomorrow ALOHA is released. After much begging I was invited to see a screening earlier this week. I make no bone about my love of Cameron Crowe. If they made posters of directors I would hang his over my bed. It's hard to find films these days that feature the personal journey and Crowe is a master of them..

Tuesday night as we waited for the lights to dim in the theatre we were surprised by an appearance by the director himself. He urged us to set aside any leaked emails we might have read disparaging ALOHA. Personally I choose not to read the emails that came out but I know a lot of you did and I too would encourage you not to pay attention to how the sausage is made, because it is delicious.

Aloha is a story about selling out, as is often the case in Crowe films. The romance of the space program has been replaced by greedy megalomaniac billionaires (wonderfully played by Bill Murray).  Brian Gilchrist (Bradley Cooper) is said billionaire's prodigal employee returned for a chance at career redemption. Enter the extremely earnest Captain Allison Ng (Emma Stone), Brian's military baby sitter. She has different ideas about what kind of redemption Bradley's character should be after. Conflict and canoodling ensues.

The second story features Brian's (Bradley Cooper) long lost love Tracy Woodside (Rachel McAdams) who is married to the silent pilot Woody Woodside ( John Krasinski). There are lots of unresolved feeling and some hysterical scenes where they are resolved.

I found the film very sweet and even in a theatre full of film critics there was laughing out loud and a trickle of applause at the end. If you are looking for a film without super heroes, earthquakes, or post-apocalyptic shenanigans, run don't walk! They are few and far between and this is a good one. 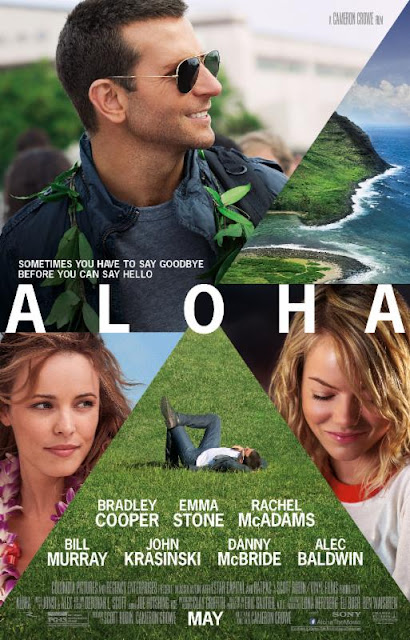 Update: I know I was virtually on my own in liking this film. I definitely get why people were upset about Emma Stone's character and I thought I would share Cameron Crowe's response to that.

You can find it on his blog THE  UNCOOL
Posted by Elise Crane Derby at 12:57 PM

I will watch virtually anything with Bill Murray and/or Alec Baldwin. I'm in! Glad to hear you like it.... even without explosions, tornadoes, superheroes and LOUD LOUD NOISES!
#lovethesausagecomment :)

I'm so tired of loud noises. I want everything told to me in quiet voices and slow movement.