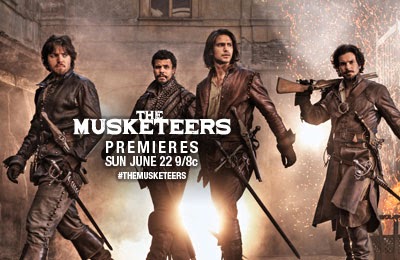 Swashbuckling is back in a big way. BBC America will premier their THE MUSKETEERS this Sunday. I got a sneak peek and I liked what I saw. It a fresh take on a story we know and love. I look forward to seeing the developement of the series.

Here's BBC America's description: The Musketeers, is set on the streets of seventeenth century Paris, where law and order is an idea more than a reality. In addition to being King Louis XIII’s personal bodyguards, Athos, Aramis and Porthos stand resolutely for social justice, honor, valor, love – and for the thrill of it. Luke Pasqualino (Skins, The Borgias) stars as D’Artagnan alongside Tom Burke (Great Expectations, The Hour) as Athos, Santiago Cabrera (Merlin, Heroes) as Aramis and Howard Charles (Royal Shakespeare Company) as Porthos. Peter Capaldi (Doctor Who, The Hour, The Thick Of It), Maimie McCoy (Loving Miss Hatto), Tamla Kari (Cuckoo, The Inbetweeners Movie) and Hugo Speer (Bedlam) also star in the 10-part series created by Adrian Hodges (My Week With Marilyn, Primeval)

As a Doctor Who geek I admit I am somewhat intrigued by Peter Capaldi as Cardinal Richelieu. He's a true blue baddy in this, but in just a month or two we'll be seeing him as our well loved Doctor.

Back to THE MUSKETEERS. Here is a little trailer to give you a taste.