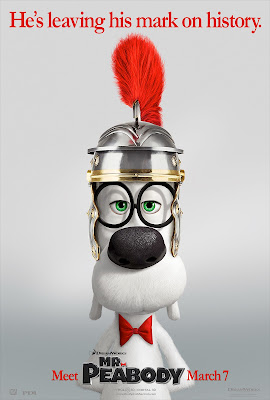 You may have heard an animated film is being made of the classic, beloved cartoon Mr. Peabody and Sherman. It's the old story of the genius dog who does his civic duty and adopts an orphaned boy. In the cartoons of my childhood Mr. Peabody and Sherman travel through time learning about history, and the film is much the same.

When I was invited to see some clips from the movie, I admit, I was concerned I would be disappointed. I have to say I was pleasantly surprised. I really liked the parts of the film I saw. It was exciting and funny. I'm sure my 9 year old daughter will eat it up with a spoon. 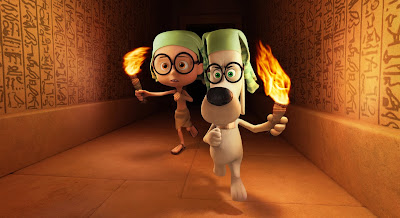 Mr. Sherman is portrayed by Ty Burrell, of Modern Family fame, and I think we all know how adept he is at comedy. The assembled press were given some Q&A time with Ty and he told us that playing a genius was the stretch of his career. Also he spoke about the difficulty of getting his naturally low voice to sound more like Mr. Peabody. I think he was extremely successful.

The film opens March 7th and I really think this is the type of film you'll enjoy seeing with your kids. If they happen to learn a few thing about history along the way so much the better.