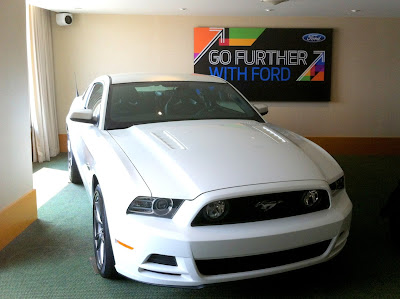 For the last 3 years, Ford has held an annual conference in Detroit for the press and related tech industry reps to share the direction Ford is currently heading and to discuss the future trends of technological needs that may help them to make relevant additions to their fleet of cars and trucks in the future.  I got to see and participate in some behind the scenes goings-on, and meet some fabulous people from Ford as well as fellow bloggers. 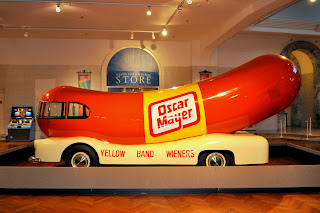 Day1: The Henry Ford Museum was awesome.  Opened in 1929, it's theme is to house industrial items of historical importance.  During our browsing, we saw one of the best collection of cars I have seen, and some were included in very elaborate settings of their time.  There were so many other worthwhile sights, it is worth seeing in person.  Some bright sightings were a collection of very large early power generators and pumps,  the bus that Rosa parks refused to give up her seat on,  dioramas of US trends in each decade of the 20th century, and a 1952 Oscar Meyer Wienermobile.  During dinner we were greeted by the Ford CEO, Alan Mulally, who spoke about Ford's past, present and future, with a message that Ford was built as a company that provides affordable cars to all classes of people, and whose future will continue in that direction. 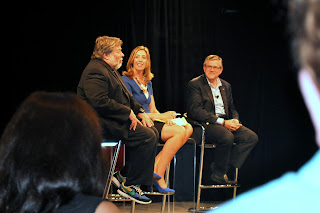 Day2:  Five trends were discussed by 3 person panels.  The panels consisted of one Ford executive with guests from other companies or media outlets including Ben and Jerry's, CNET, Google and Apple to name a few.  One was titled Trust is the new Black.  Ben and Jerry's, Warby Parker (a new company with a conscience that makes sunglasses), and Ford representatives talked about how important consumer trust is an important current trend.  Another called Disrupting the Drive, had a CNET editor and Steve Wozniak of Apple talk with a Ford electrical development head about future trends that are being anticipated, important because of the three to five years it takes to go from design to production in the auto business.  During the noon break, we were invited to walk through one of Ford's research and development buildings, where we saw some of the work being performed on car models, and were told about some of Fords interesting new design features, including current co-pilot technology that can sense lane boundaries that could help warn drivers when they are drowsing.  For dinner, we were treated to a theme dinner that celebrated Mustangs 50th Anniversary. 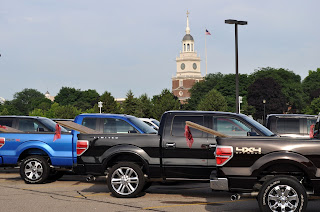 Day 3:  A day of test driving Ford vehicles on the road and at the test track. 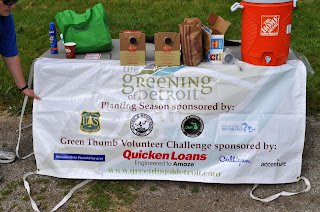 I got to drive a new Ford F150 4X4 pickup truck on the street with supplies to deliver to a charitable organization called "The Greening of Detroit"  which through donations from many Corporations including Ford, is refurbishing parks and greenways in Detroit Neighborhoods. 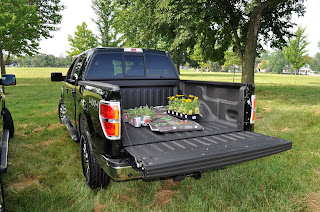 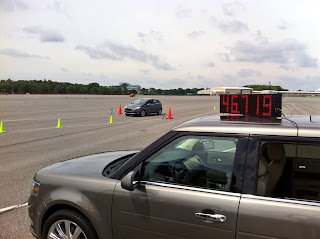 After making my delivery to a nearby park, I dropped the truck off and was bussed to Ford's private test track.  There we drove the Ford Fiesta in a fast paced time trial race, which I really thought was fun.

Ford came through looking like a champ.  I was impressed with Fords concepts and the direction that the company is heading.

This is a guest post by John Derby who moonlights as Mr. Elise's Ramblings.
Posted by Elise Crane Derby at 3:49 PM