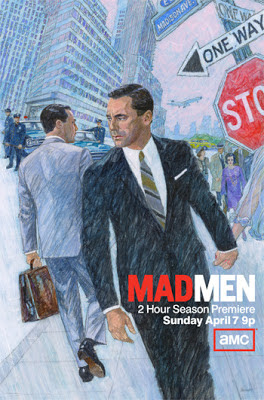 Seeing Don and Megan cuddling and talking about Don's trip to LA. They're being kind of sweet to one another but they're saying really mean things. She says she made the worst mistake of her life when they got together on the trip to LA with the kids. Then when she tells him to stay away from actresses, he says he hates actresses. Are they fighting??? You really see how divided they are as people while they watch both the democratic convention and the riots that followed. Their experience of both are incredible different.

The scenes between Peggy and Joan were fascinating. These are two women who are both on career paths with no way beaten for them. As much as they struggle with one another's methods they also support one another in their own way. They have so much in common as working women, even more than they know if you include the children they both have by coworkers, that they pretend didn't happen. Still Peggy has gotten a lot of help from men along the way, while Joan hasn't. She feels she has to make her own way and if that means cutting Pete out, so be it.

SCDP and CGC are one but really they are still two separate entities.  Cutler is definitely over SCDP partners and with the odd decision to change their name too Sterling, Cooper and Partners, I think he's convinced Chaough to stage a coup. Why would they cut their names out that way, willingly? I think they're setting them up in a false sense of security so they can get away with something else. 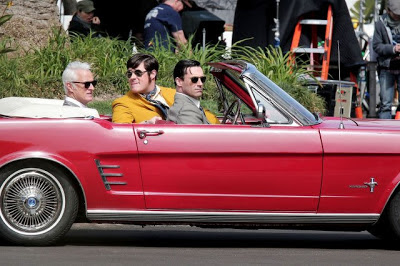 Don and Roger's trip to LA. I'm giving Roger a pass for basically calling LA a primitive land with hill billy natives. LA and NY are represented as really different worlds. Don and Roger walk around in their buttoned up suits, while everyone around them in LA is in Nehru jackets. When Roger runs into Danny at a party he tries to belittle (pardon the pun) him, needling that once would have worked ends with Roger getting socked in the gut by now Daniel J Segal. The world has changed.

Finally there is always the duality that is Don/Dick. As soon as he took a hit of the hash pipe, I thought we were in for some flash backs, but we got an insane and almost deadly hallucination. It starts with Megan turning up saying he is free to be with other women, because we all share in LA, which by the way is where she lives. I don't know if that means he feels he left the real Megan (the one he wanted to be married to) in LA, or if she feels as though she lives on the opposite coast from him. Either way it doesn't bode well for their relationship. Suddenly, Megan morphs into Dinkins, the solder he stood up for in Hawaii. Dinkins' is missing an arm and tells us that his wife thinks he's MIA but really he's dead. Don asks when he'll get his arm back, which leads to the remark "Dying doesn't make you whole, you should see what you look like."

We cut back to reality here and Roger has pulled Don from the pool. The last lines we hear before the Megan hallucination is Don saying he's thirsty and the woman with him saying "there's a pool full of water out there". The strange thing is when Don is looking at his body floating in the pool he is wearing white pants, but when he's pulled out they are black. Might be some good old white death imagery, or something else. Roger is wearing white pants. Does he want to kill the Roger in him and move out to LA with imaginary Megan who told him she was having his baby and they had a second chance?

Roger, Don and Harry at the carnation meeting being served chocolate milk.

Ginsberg blowing up at Cutler, and then Cutler calling him on the hypocrisy of his politics and cashing his checks from Dow and Chevy.

Avon doesn't know whether to be groovier or nostalgic. Seems like there is a lot of that going around.

In the final scene Pete smokes the joint Stan was smoking in the art room. Was I the only one that remembered Pete can't smoke? He's tried before and has huge coughing fits...

For all my Mad Men Posts