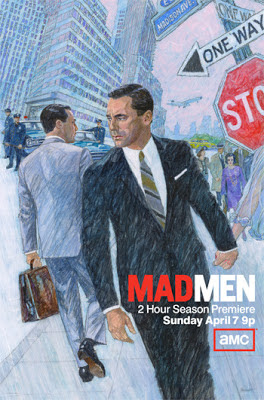 AMC's Mad Men returns for it's 6th season in less than a month, April 7th. Yesterday they released this season poster and it's quite a departure from the Mad Men Posters of the past. The others have either been our beloved black silhouette or a photograph. This one is a drawing that is derivative of the late 60' and early 70's.

Now what does this poster tell us. Well as usual our Don is looking over his shoulder wondering if those cops are there for him. I kind of hope he reveals his alter identity this season and he can finally fully merge them. Although, I don't know what that would do for the dramatic edge of the show. Probably nothing good.

All the Megan haters are probably happy to see her out of frame. I'm assuming that hand he is holding is hers. Perhaps that means this season she'll be busy with her acting and while they are still together she is out of the picture. Betty will be happy about that too, she's the ultimate Megan hater.

Beyond that I can't imagine where they're going.The firm is successful again and they'll all be rolling in cash. Hopefully Joan is finding some kind of happiness, I'm guessing she's off men. I really did hope Roger would have gone off the psychedelic deep end, but based on the pictures that have come out it doesn't look like it. Though, my grandfather's name sake, Harold Crane seems to be on something.