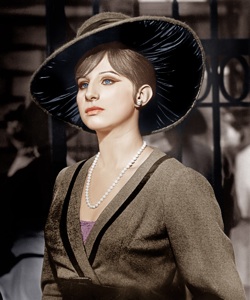 I am so excited TCM announced today the newly restored Funny Girl will open the 4th TCM Film Festival. Could an announcement of Striesand's participation be far behind???

Other restored films showing at the festival include Giant, The General, and The Great Escape. (it must be a G thing??)

If you've somehow missed my previous years post on TCM Film Fest. Check them out. They include interviews with Tony Curtis, Eva Marie Saint, Ernest Borgnine, Eli Wallach, and more. If you're a classic movie fan, I highly recommend you attend. Sadly many of these people are near death, and often they are gone within the year. Don't miss the chance to see them. I also love seeing these films with an audience, who loves them as much as I do.