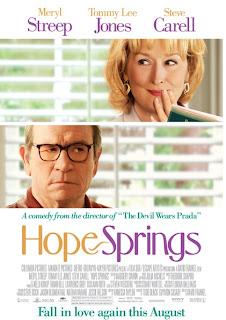 Hope Springs opening August 8th stars Meryl Streep and Tommy Lee Jones as a couple with 31 years of marriage but absolutely no communication skills. The majority of the film takes place during their couples counseling and home exercises.

Going in I thought it would be more comedy, like It's Complicates or Somethings Gotta Give, but it's pretty heavy. I'd go as far as to say a bit "cringy" in it's revealing their personal problems, even if they are fictional.

It could be called a" feel good" movie, just for the sole reason that unless you're on the precipice of divorce, this movie makes your marriage look great. In seriousness it is an interesting look at what it takes to pull a marriage back from the edge. Both Meryl and Tommy are great. Just be prepared for more drama than comedy and maybe a few tears at the end.