Oz The Great And Powerful 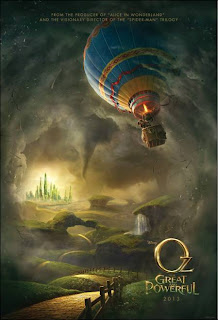 Sam Raimi is directing a prequel to The Wizard of OZ. It will star James Franco as the wizard arriving in OZ. I'm intrigued, other than The Wiz, I've yet to see any other interpretations of the Wizard of Oz that I like as much as the original film.

The cast will include James Franco, Mila Kunis, Rachel Weisz, Zack Braff, and Michelle Williams. It won't be release until Spring 2013 so we've plenty of time to ponder.

Disney’s fantastical adventure “Oz The Great and Powerful,” directed by Sam Raimi, imagines the origins of L. Frank Baum’s beloved character, the Wizard of Oz. When Oscar Diggs (James Franco), a small-time circus magician with dubious ethics, is hurled away from dusty Kansas to the vibrant Land of Oz, he thinks he’s hit the jackpot—fame and fortune are his for the taking—that is until he meets three witches, Theodora (Mila Kunis), Evanora (Rachel Weisz) and Glinda (Michelle Williams), who are not convinced he is the great wizard everyone’s been expecting. Reluctantly drawn into the epic problems facing the Land of Oz and its inhabitants, Oscar must find out who is good and who is evil before it is too late. Putting his magical arts to use through illusion, ingenuity—and even a bit of wizardry—Oscar transforms himself not only into the great and powerful Wizard of Oz but into a better man as well.

Could be good. I'll let you know when I do!
Posted by Elise Crane Derby at 5:50 PM

A very odd coincidence: My husband was one of two Cinematographers on "Oz, The Great and Powerful," and he was showing me the poster on his phone. As I waited it for it to download, I checked my emails and opened your blog post. Just as the poster was appearing on his phone, the poster was appearing on mine via your blog. So strange! They shot the whole thing on stages in Detroit, Michigan. They got a big tax break from the state but it was the last film to get that. My husband was gone for five months - very grueling but he has always enjoyed working with Sam Raimi and he's excited about the film. Which isn't often the case about the stuff he works on. So we shall see...

That is a crazy coincidence!!! Glad to hear it good.