Tomorrow is the first day of The Turner Classic Movie Classic Film Festival. Which loosely translates to Mecca for classic film fans, such as myself.

This morning I got to attend a round table discussion with our high priests Robert Osborne and Ben Mankiewicz. Which was a huge thrill but also very interesting.

Robert Osborne talking about how he got interested in film told us that it was learning about what was going on in the industry and the people lives that got him and keep him interested in film. That even watching a bad film is made more compelling when you know the back story of the script, studio, actors etc..

When I asked if he thought it was important to see films on the big screen I was surprised that he thought some films are better on the small screen. His example: The Wizard of OZ, where on the big screen you can see all the wires and it pulls you out of the experience. Still he thinks we should see classic film on the big screen the way they were intended. With a crowd and no interruptions. This fest he is looking forward to seeing Cover Girl with Gene Kelly and Rita Hayworth.

On a film Osborne once hated but now likes he said Desire Me with Greer Garson. He told us that director George Cukor refused to have his name on the picture he thought it was so bad. But knowing that when he went in he thought it was pretty good. Especially, knowing the back story. By today standards he said it was pretty good, especially if compared to Nicholas Cages last picture. (Sorry Nicholas).

Finally, he said this really sweet thing about Rita Hayworth. Someone was asking him if he knew the name of an actress in a film they had seen but didn't know the name of. Robert asked him to describe the film, and quickly realized it was Gilda starring Rita Hayworth. Here's the sweet part he wished she was alive today to know that it wasn't the studio and PR team that made here so popular, if a kid more than 50 years later is still reacting to her. I loved that. I wish she was here too.

Ben's first question was in regards to style in the movies (this film fest's theme) and which films influenced him. He stood up in his jeans and t-shirt and shrugged his shoulders "Hey..." Then he said how he likes Steve McQueen, Cary Grant in a suit, and in the end he copped to admiring some of the clothes on Californication.

When asked about the difficulty of picking which events to be at during the film fest when there are some times as many as 6-7 happening simultaneously. Ben response was that they want people to have to make hard decisions, they want all the events to be well attended, and people to leave wanting more. It's something he says they learned from the Telluride film fest.

It was a great time and both gentlemen were great sports and had to be pulled away from us.

I'm looking forward to the next 4 days of films. If you want follow me on Twitter (@EliseCD) where I'll try to tweet as much as possible between films and during some of the many amazing Q&As. 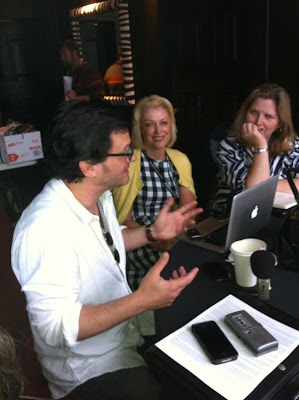 Thanks for this pic from Will at The Cinementals. I (far right) really am soaking it in with Kim from Glam Amor
Posted by Elise Crane Derby at 1:08 PM