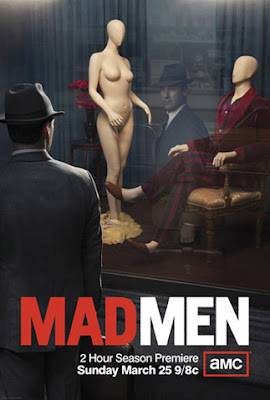 Today marks the last Sunday till Mad Men returns to AMC. That's right kids Next Sunday the long wait will come to an end. I've just finished rewatching season 4 and I have some Mad Men Season 5 predictions.

At the end of season 4 I was disappointed that Don had thrown over Faye for Megan, but after rewatching it again I saw something new. Don is tired of perfection and the pursuit of it. Where Betty wants the children to behave all the time, Megan says don't cry over a spilled milk shake. She even has unusual teeth and is foreign (OK French Canadian). Megan allows Don to just be, it's true that she won't challenge him like Faye. But maybe now that he is entering mid life he is ready to relax, if not face up to reclaiming his former identity.

I'm guessing that we will finally get to find out about where Joan came from this year. I am dying to find out what the medical connection is for her. Christina confirmed that Joan's coughing in the John Deere foot amputation screen was in the script and that she was curios too why she was coughing and no one else was. Fingers crossed for that reveal. Now Joan's baby and marriage... I'm thinking Joan's baby will be born when we rejoin the show. I'm hoping her "lovely" husband will have been killed in Vietnam, but unfortunately I think that would be too neat. But I still hold out hope he'll get it eventually, hopefully killed by his own troops.

I would love to see Betty getting divorced and start out on a voyage of self discovery. But I doubt that will happen. She will probably just continue on her crabby, ostrich with her head in the sand way. I could definitely see her having a baby with Henry. Which would fit conveniently with January's real life pregnancy during the break.

I'm hoping we will find Peggy and Abe in one another's arms, probably living in sin and loving it. Pete is most likely continuing to climb the corporate ladder selling off pieces of his soul along the way.

Just one week till we find out how right or wrong I am. Until then you could join the #MomsLAChat Wed. the 21st at 10am PST for a fun Mad Men twitter party with great prizes from Bev Mo, Queen of Hearts and The Dead Celebrity Cookbook author Frank DeCaro. RSVP to win
Posted by Elise Crane Derby at 12:35 PM

I feel the SAME way about Joan’s husband! I didn’t even pick up on the coughing part so thank you for bringing that to light, I’m dying to know what will happen with Joan and her baby since she’s my favorite character on Mad Men. I foresee a lot of pre-teen angst in Sally and I hope that provides Betty with a good slap in the face with reality. Plenty of my girl friends who I work with at DISH have several handfuls of their own predictions for season 5, so I’m excited to find out who’s right or wrong. We’re all getting together tomorrow night at my place, since I have the biggest HDTV, and since AMC is part of the free HD programming I get for life from DISH. We’re all eager for the season premiere of Mad Men and I’m especially looking forward to your response of the premiere so enjoy, I know I will!

I know I can't wait to see what happens. I've been running all the possible scenerios I can think of through my brain for months. I am a complete addict, stealing from your mother kind of addict. Yes it's that bad.