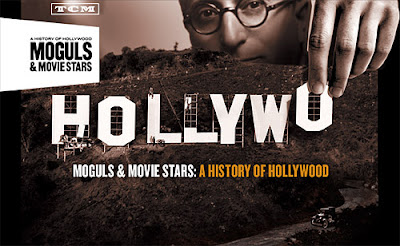 Very excited to hear TCM is reairing Moguls & Movie Stars: A History of Hollywood in it's entirety Monday, September 5. I think that's Labor Day, so we'll all have the day off to park on the couch and enjoy the whole thing.

Here's the press release for all the details:

Turner Classic Movies (TCM) will present a special encore of its Emmy® nominated documentary series Moguls & Movie Stars: A History of Hollywood. The expansive seven-part series will air in its entirety on Monday, Sept. 5, beginning at 12:45 p.m. (ET).

Moguls & Movie Stars: A History of Hollywood tells the extraordinary tale of the American movie industry. Spanning from the invention of the first moving pictures to the revolutionary, cutting-edge films of the 1960s, this ambitious production is an epic history of Hollywood, detailing the personalities, inter-personal relationships, collaborations and conflicts that created an industry and established a new art form. Moguls & Movie Stars was produced by TCM in association with Bill Haber’s Ostar Productions
Posted by Elise Crane Derby at 11:19 AM