A Little Mad Men Until Season 5 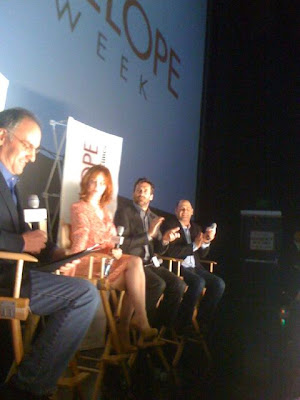 The other night I got a Mad Men Season 5 Amuse Bouche. That's right the LA Times' Envelope series hosted a screening of Beautiful Girls from Mad Men Season 4 and a Q&A with series creator Matt Weiner, and cast member Jon Hamm, Christina Hendricks, and Kiernan Shipka.
It was amazing and I even got to ask a question. What you ask: I asked if we would get to learn more about Joan in the coming season. To be truthful with the eyes of Matt Weiner and company on me I could barely string together a sentence, much less understand their answer. But here's what I think happened.

I asked the question and Matt Weiner said "why do you have to know?" at which point I started babbling about all the medical stuff and coughing, to which he said "you mean with the lawn mower" and then I said "yeah and the ant farm". Which was the point I realized knowing every time a character has coughed on a show was a little weird. So I said so. Then Christina jumped in to say that the coughing was in the script and she wondered why she was coughing and no one else was. I think it was at that point that I blacked out. I do remeber John Hamm looking at me like he was William Shattner and I had just approached him on a city street dressed as a Clingon.

What I took from this is that there is something to my medical theories about Joan but Matt Weiner would prefer to let it unfold in his own time. So, I'll try to control myself going forward. The last thing I want to do is anger the god of my Mad Men world. So please Mr. Weiner take your time, I will be here waiting when you are ready to show it. (really there is no saracasm in that statement, no really)

Here's some video of God talking about season 5.

I loaded a few more videos to my Elise's Ramblings Youtube Channel
Posted by Elise Crane Derby at 12:20 PM

On the floor laughing (AKA rotflmao)- I don't envy you, but I love that you freaked out Jon Hamm. Brilliant!
A

I'm a big fan of Mad Men. The writing and acting are superb. But if they don't get more episodes on the air soon, they're going to lose my attention.

There are a lot of other good shows where we can spend our money: The Wire, Breaking Bad, Modern Family. The Big Bang Theory is frivolous fun.