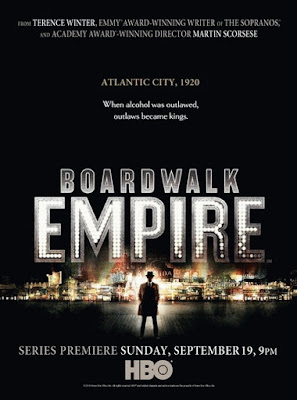 Boardwalk Empire starts on HBO tomorrow night. Steve Buscemi stars, who I love, ever since Mr. Pink.
I have tried and tried to get a screener of Boardwalk Empire but with no success. Probably just as well, since it's always excruiating to have to hold my tongue until the air date.
I have been waiting for this premiere for, what feels like, forever. If I wasn't dressing up in 50's garb for Wednesday night's Blogger Prom, I might have been inspired to throw a 20's party tomorrow. But as it is I'll be glued to the couch all by my onesie tomorrow night for Boardwalk Empire and of course Mad Men.
Thank god True Blood's over, or my DVR would be in over drive.
Posted by Elise Crane Derby at 3:49 PM