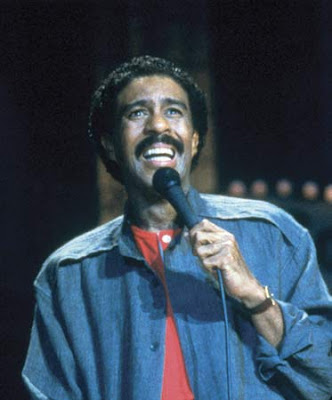 American Cinematheque at The Aero Theatre in Santa Monica is showing a double feature this Friday of Richard Pryor comedy shows. He really was a genius. I remember watching both of these shows on the Z channel over and over again.

Double Feature: RICHARD PRYOR LIVE ON THE SUNSET STRIP, 1982, Sony Repertory, 82 min. Richard Pryor came back from his nearly fatal freebasing accident to create the best stand-up act of his career, captured beautifully in this landmark concert film by director Joe Layton and cinematographer Haskell Wexler. Pryor's riffs on marriage, the mob, Africa, and his own drug problems are hilarious, but the underlying complexity of his material makes this the rare stand-up routine that's as poignant as it is funny.

RICHARD PRYOR... HERE AND NOW, 1983, Sony Repertory, 83 min. Dir. Richard Pryor. The final concert film of arguably the greatest stand up comedian of all time, is his most raucous and political, as he takes on Ronald Reagan, racism, and the hecklers in the audience, as well as reintroducing classic characters like wino philosopher Mudbone!