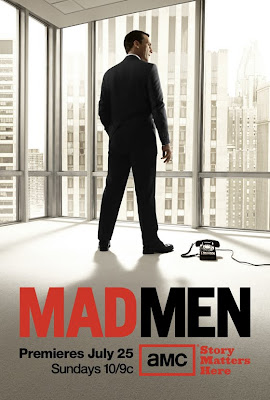 Dr. Fay gathers up the under 25 year old girls in the office to form her focus group to see how the Ponds ad should be promoted, behind the glass we watch the first girl break down into a rejected mass of feminine insecurity, then Allison, Don's secretary follows suit in tears thinking about her rejection by Don. Don is on the other side of glass sweating it out that Allison will spill his secret.
Things are tangling up for Don in the office, where previously Don did not fool with the secretaries, now he doesn't know to keep business and personal separated. Allison says to Peggy, "Don is a drunk, and he pretends things didn't happen". This is the third time someone close to Don uses that pejorative.
Pete feels rejection when the client demands that Clearasil is in conflict with Ponds, and must be dropped by SCDP. Pete fought to get that contract from his father-in-law, and now he must tell him that the contract is dropped. To Pete's credit he "turns chicken shit into chicken salad" and demands that with Clearasil gone, his father-in-law must award SCDP the larger part of the company's business. His father-in-law knows Pete won this round because he can't refuse Pete his demand, since Pete and his daughter might now give him a grandchild. He mutters under his breath son-of-bitch... Pete played the grandchild card, and won.
With Pete telling everyone at SCDP that he is to be a father, Peggy feels a real stabbing rejection, since she has already given birth to Pete's first born son, she holds fast to her secret and just surprisingly bangs her head against the desk, a few times, without messing a single hair on her head. (One criticism I have about pregnancy talk - at this time, no one would mention their pregnancy until they would be "showing". It would be kept secret between a husband and wife. Miscarriages could take place easily during the first 4 to 5 months and one should not tempt fate, so secrecy was the practice.) Peggy does maintain control and leads with her head instead of her heart.
Dr. Fay tells Don her Focus Groups shows that the ad of Ponds Cold Cream must be rejected - the one that is a new idea, that women want to do the beauty ritual - 7 day beauty regime - for themselves. Dr Fay declares the Ponds ad must show women's desire to get married is fullfilled by using Ponds. Don knows that that concept is old-fashioned, like Peggy told Freddie.
The biggest Rejection, and what this episode is named for is illustrated with Peggy's initiation into the world of NYC Art scene. Here she is partying with the Counterculture glitterati in the bohemian anti-establishment world. Smoking weed, watching film art, hobnobbing with famous photographers, meeting a lesbian friend, (Joyce), discussing radical politics, (Malcolm X assassination) , kissing a journalist in the closet while the party is raided by police.
At lunchtime, when you see the SUITS on the right of the lobby and the counter-culture kids on the left of the lobby, you see Peggy locking eyes with Pete, each ensconced with their peer group - separated by a dimension of glass, a metaphor for the real separation that is taking place in society. The Suits vs. the youth, but it is a portent of what is taking place in society. Change.....
Don the Drunk stumbles with his key into his apartment, and watches the geezer across the hall berated by the old wife, "Did you get pears?" "We'll discuss it inside". Even the geezer has to experience his rejection - until he is buried and the gravedigger is throwing dirt on him.
Remember Dr Fay said the human condition is the conflict of "What I want to do vs what is expected of me. "

This post was written by Madonna from the Mad Men Yahoo group. I am currently roaming with the buffalo in Yellowstone national park, where there is no TV (the horror). I am only out of the park for a day, so I am able to post this.

A huge thank you to Madonna for taking this on. It's so good I'll be embarrassed to do it next week.
Posted by Elise Crane Derby at 5:32 PM

I just got to watch the episode on Amazon. I loved it. I feel like Peggy and Pete were saying goodbye to one another in that last scene through the company doors. Farewell and no hard feelings.
Also I think the title The Rejected could also apply to those who are rejecting the old socital rules. Allison won't pretend nothing happened with Don, she confronts him. Is Joan giving Don the old lady secretary, saying it is no longer exceptable to behave this way with the hired help or you need a mother if you're going to act like a child? Either way hope Don gets the message.
Loved Peggy so comfortable being kissed by a women, smoking pot, and her clothes were great.

I've entered a contest to win a walk-on role on that retro-licious TV show, "Mad Men".

If you wouldn't mind taking two seconds to vote for me, I would really appreciate it.

Click on my name above to go to my blog and vote.