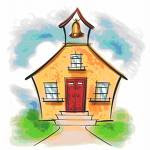 We have officially begun our last year in preschool, and that means only one thing...start looking for your Kindergarten. I am not in a financial bracket where we are even considering private schools. We are in LAUSD with a myriad of public school, charter schools, and magnet schools in our immediate area. All of which have pros and cons. None of which we are guaranteed to get into, with the exception of our local school, which has a Spanish immersion program, that would be great, though after three years of a very progressive preschool any straight public school could be a shock to my daughters system.
I've visited Sandra Tsing Loh's site about navigating the choices in LAUSD http://www.sandratsingloh.com/index.php?pr=Guide_to_Schools. Which makes my head spin. I like to think I am not that frenzied. Though it could start to creep up on me. I preemptively looked at several schools last year, and the more I saw the more I didn't know where my kindergartner would do best. All the schools seem to have their own "gimmick"( just like strippers in Gypsy) there are language schools, and art school, Waldorf schools, and every other kind of school, and they all have something special to offer. Of course, they all have a down side too, some of them, you have to be in the after school program, almost all of their lunch programs are anything but nutritional, and then there are the playgrounds, the teachers,and the principles. There are a million and one things to consider.
Ultimately, I think I will have to do what everyone seems to be doing, which is enter every schools lottery and see where we get in. At which point I will put all their names in a hat and draw!
In the long run I wonder if it matters. I was reading a blog the other day about being overly protective of our kids, when we should be letting them experience lifes difficulties. We all just went to our local schools, though then they actually were funded. Still, as I've mentioned in previous blogs I was not a stellar student, now whether that had to do with the school or just my own distractibility who can say. I would like to give my daughter every chance to be a successful student, then if she screws it up we'll know it's just heredity.
I'm sure you'll be hearing more about this from me after the holidays and the open houses start. I promise not to completely freak out. Wish me luck...
Posted by Elise Crane Derby at 9:42 AM

You have my best wishes to not freak out. It can happen to the best of us, so bear that in mind.

Well, have you come to a decision yet on where to send your little kindergarten? I guess you probably won't find out until the summer or so on what school has accepted her. Keep us posted!

I think I'm going to stick with my local school, which is a spanish language immersion school. Still I'm worried about the budget cuts and will enter the lotteries for the other public schools in my area. Just in case.