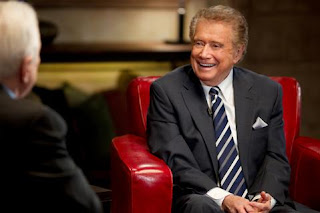 
As Robert Osborne says "One of the things I enjoy doing most at TCM is sitting down with people from different backgrounds to talk about movies they love, and finding out why.This year's list of Guest Programmers is an amazing mix of remarkable people who've chosen an intriguing mix of films for reasons I think TCM's audience will find, in most cases, surprising and absolutely fascinating."

I can't wait. Here is the complete list of Guest prgrammers and their choices

Jules Feiffer airs Tuesday, March 20. His picks for the night include the Depression-era musical Gold Diggers of 1933 (1933), the delightful screwball comedy My Man Godfrey (1936), the gripping melodrama They Drive By Night (1940) and the film noir classic This Gun for Hire (1942).

Anthony Bourdain airs Tuesday, April 10. He has chosen John Ford's stunning western The Searchers (1956), the moody French-Italian thriller Eyes Without a Face (1960), the acclaimed British crime film Get Carter (1971) and the offbeat comedy-drama Withnail & I (1987).

Spike Lee airs in July. His movie selections include Billy Wilder's cynical drama Ace in the Hole (1951), the nightmarish thriller The Night of the Hunter (1955), the bitingly satirical drama A Face in the Crowd (1957) and Elia Kazan's Oscar-winning blue-collar drama On the Waterfront (1954).

Regis Philbin airs in September. He is set to present the domestic comedy Mr. Blandings Builds His Dream House (1948), the love-triangle musical High Society (1956), the boxing biopic Somebody Up There Likes Me (1956) and George Stevens' rousing action-adventure Gunga Din (1939).

Jim Leher airs in October, amidst the final buildup to the 2012 Presidential election, to present four of his favorites, including the Oscar-winning political drama All the King's Men (1949), Frank Capra's romantic screwball comedy It Happened One Night (1934), George Cukor's Oscar-winning musical My Fair Lady (1964) and Alfred Hitchcock's nail-biting thriller North by Northwest (1959).