Drew Barrymore to host The Essentials on TCM 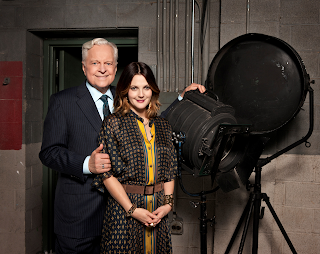 Drew Barrymore said last year at the TCM Film Fest that she was dying to be on TCM and now she gets her wish. Beginnning this March she will be the new cohost of The Essentials with Robert Osbourne.
I love Drew Barrymore. She is just one of those people who make you happy just looking at them.
Can't wait to see what films they pick? Here's a peak from the press release.

The 12th season of TCM’s The Essentials showcase is set to launch Saturday, March 3, 2012. The lineup of movies selected by Barrymore and Osborne will include such enduring classics as George Cukor’s star-studded comedy Dinner at Eight (1933), which features Barrymore’s grandfather, John, and great uncle, Lionel; George Stevens’ comedic romance Alice Adams (1935), starring Katharine Hepburn and Fred MacMurray; William Wyler’s atmospheric version of Wuthering Heights (1939), starring Laurence Olivier and Merle Oberon; Howard Hawks’ To Have and Have Not (1944), which paired future spouses Humphrey Bogart and Lauren Bacall for the first time; Carol Reed’s thrilling mystery The Third Man (1949), with Joseph Cotten and Orson Welles; Charles Vidor’s film noir Gilda (1946), with Glenn Ford and the sensuous Rita Hayworth; and Billy Wilder’s gender-bending farce Some Like It Hot (1959), with Jack Lemmon, Tony Curtis and Marilyn Monroe.


More on TCM
Posted by Elise Crane Derby at 9:45 AM