Company at a Theatre Near You 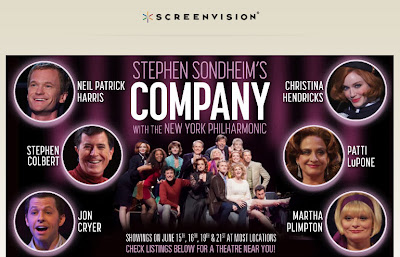 Follow the link above for theatres near you, everywhere from Alabama to Wyoming!

I'll be seeing it here in Culver City if you care to join me.

Company's plot revolves around Bobby (a single man unable to commit fully to a steady relationship, let alone marriage), the five married couples who are his best friends, and his three girlfriends. It's a concept musical composed of short vignettes, presented in no particular chronological order, linked by a celebration for Bobby's 35th birthday.

The original Company on Broadway in 1970 was nominated for 14 Tonys ®, winning Best Musical, Book for Musical, Original Score, Lyrics, Set Design and Direction of a Musical.
Posted by Elise Crane Derby at 10:38 AM