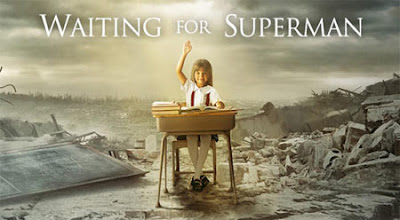 Waiting for Superman is a very stirring film about the state of public education in the United States. I will tell you right off the top the film started on the wrong foot for me. The narrator is talking about how ideally he wanted to put his kids in public school, but as it became a reality it was too frightening/concerning and put them in a private school. He says how he drives by 3 public schools to get to his kids private school. It's at that moment that the film shows a car pulling into a private school parking lot. It's the private school that is two blocks from my house. The schools that he drives by are the neighborhood schools in MY neighborhood. Some of these are better than others but none of them are bad.
While I'm pleased that they made this film, and think it is very effective, I think the film makers need to realize that they are a part of the problem. When I was growing up in Los Angeles in the 70's and 80's most people put their kids in public school. Including the fabulously rich. I went to school with movie stars children, there were plenty of kids with BMW in high school, as well as kids who lived in apartments with single mothers. We were all lumped together. Maybe we were tracked and self segregating, but we were all in the same school.
I think the affluent have to take some responsibility for their loss of faith in public education. Once they started fleeing then all the middle class wanna be's followed. I'm not saying there isn't a huge problem happening with public education, but when the most financially prepared to help deal with the issue just leave, it cripples us all.
OK, that's off my chest. Beyond the above, the film makes some extremely valid points about the Teachers Union. A union two of my sisters are members of. (The following could really make family gatherings uncomfortable for me.) This film makes me want to go picket the teacher's union offices here in LA. With all the protections for terrible teachers, to the point of paying people to not work, our children are being robbed. That tenure after two years of teaching has got to go. It is costing us far to much, when we have to fire new enthusiastic teachers and keep "teachers" who literally sleep in class.
I'm going to try to find out how best to confront the Teacher's Union with that. You may be hearing back from me to that point.
Anyway, go see this film. It will rile you up and hopefully make you want to do something.

Thanks to K12 for sponsoring this post
Posted by Elise Crane Derby at 10:54 AM

LOL, the schools he's so scared of are Walgrove, etc? I have not seen this film yet, but my problem with it is that it fails to address what is to be done with all the students who are NOT hell bent on getting into the charter schools. That is who the public schools are increasingly left with (as you astutely pointed out) and films like these recommend we rachet up that process while still screaming that public schools are letting down the kids. Well, if you remove all the kids who are motivated to work hard and all the kids whose parents are motivated for them to do well, you are left with a very unmotivated group.
More important, these much ballyhooed charter schools rarely do better or even as well as the public schools according to testing. They are privately AND publically funded (more money than the public schools), have smaller class sizes, longer school days and years, and more mandatory parent involvement...and most of them don't beat public schools. Might have something to do with the under-educated, under-paid (even by teaching standards), over-worked and non-union teachers. Bet he didn't bring that up.
A

I think the problems with education are much bigger than what was portrayed in Waiting for Superman, and Race to Nowhere hit on a lot more of them than this film did. Having said that, I was glad that he did take on the problem of the teachers unions and that they are not in the business of protecting our students interest.