Got Milk/ Jerry O'Connell is a God 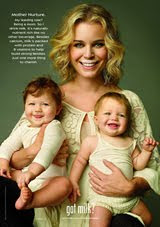 Yesterday I attended a Got Milk event at The Westwood W Hotel, which by the way is lovely. They were announcing Rebecca Romijn as their new Got Milk spokes person, with her two beautiful twin girls. We got lots of information about their " Great Gallon Giveaway" They're giving away hundreds of thousands of gallons of milk all across the country and you can enter to win a year supply at whymilk.com. You can also help raise funds for families in need at facebook.com/milkmustache.
But what I really want to tell you about is Ms. Romijn's husband, Jerry O'Connell. He is the nicest celebrity I have ever met, almost ridiculously so!

Here's what happened. In my usual illiterate way I was was trying to spell Rebecca's name for the whrrl I was doing on the event. I had some idea but whenever you put a J and an N together you question. It was just at that moment that Jerry was walking by me to get a bottle of milk (I swear he was) and our eyes met and I knew he knew how to spell her name. So when he said hi, I said hi back and then I said "How do you spell your wife's name?" and he told me and I was right. So like the cool cucumber I am, I acted like I made a touch down or something. He laughed and assured me that it took him sometime to learn how to spell it too. Nice right? Well, that ain't all...
Then I was struggling with a bunch of trash my daughter had given me and I said I need a trash can and then said I would just stick it in my purse so I could keep whrrling. You know what he did? He offered to take my trash for me, I refused, he insisted and then he took my trash. My own husband probably wouldn't have done that for me.
So what I'm saying, is Jerry O'Connell is a wonderful guy who is helpful and kind. We should all watch anything he does. Because really folks nice is IMPORTANT!!!
And of course drink your milk!
Posted by Elise Crane Derby at 10:11 AM